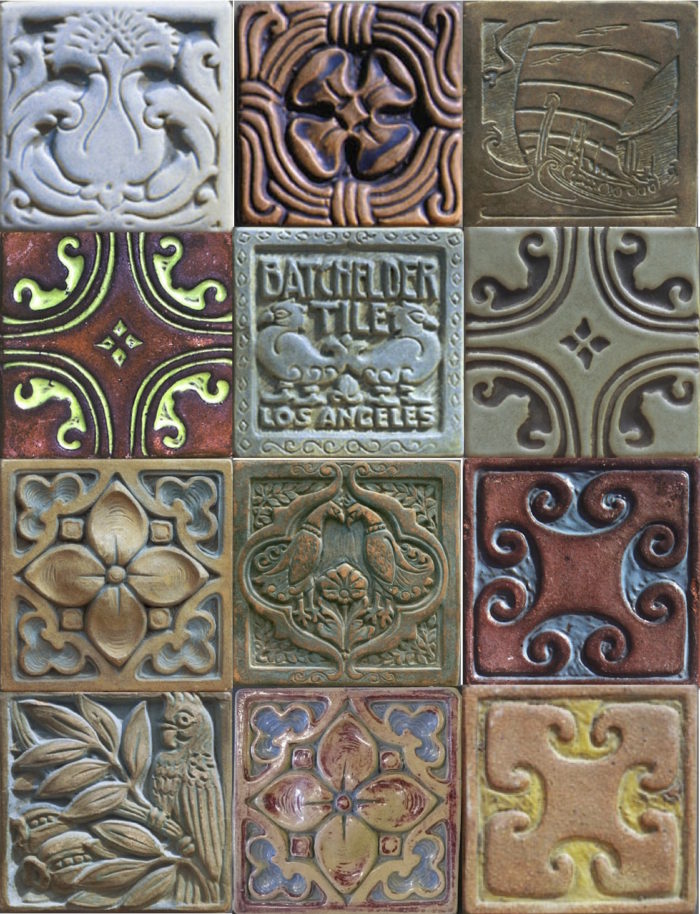 Posted at 18:57h in History, Inspiration by star tile 0 Comments

Last week, I took a yoga class at a modest, two-bedroom craftsman bungalow in Pasadena.

This was no ordinary home, mind you. It was designed and built in 1910 by Ernest A. Batchelder and his wife Alice Coleman. The rear yard housed his original tile studio, and Alice hosted chamber music concerts under the oak trees.

Batchelder started out by experimenting with tile behind his home – and he eventually became one of the leader of the Arts and Crafts style, providing tile for Greene & Greene and other leaders of early 20th C design. His factories grew and grew, and the company soon provided fireplace tile to much of Southern California.

His tiles are characterized by neutral finishes without customary shine. He achieved this by using engobes, which are a soft, metallic glaze that adds texture and color in just a single firing. He experimented with various shapes, colors, and sculpted 3d tiles, often mixing many colors and shapes in one installation. His 3d tiles feature everything from flowers to medieval images to lions to peacocks (which was his particular favorite).

In the 1920s, Batchelder had showrooms in all the major cities, but Los Angeles is most decorated with his tile. Today, these are sought-after collectibles; featured in fireplaces, fountains, bathrooms and swimming pools, but originally they were something that people of modest means could afford. Batchelder’s house, itself, was kept for years by architectural historian and Occidental College professor emeritus Robert Winter, who passed away in February of this year at the age of 94.

What I love about his tile is the willingness to mix different shapes and colors, mixing 3d tiles with plain field tile, and the incredibly personal nature of each installation. The colors of the tile seem to me to be the colors of the arroyo. He captured the soft light of Pasadena, and made it permanent through ceramics.

I was very excited and humbled to be spending time in his home. As I sat there in the dark, I sent him my thoughts, hoping he or the universe could hear. I told him that I am going to continue the work he started – that I will once again make LA the epicenter of tile. I told him I understand what has to be done, and that I’m ready.